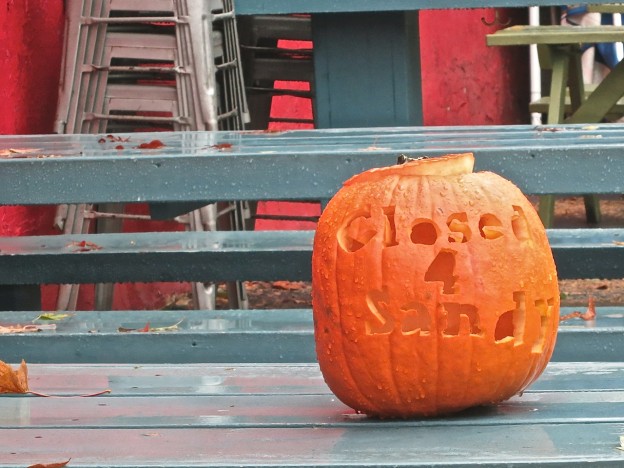 … is the opening line of an epic Crazy Horse-esque dirge by the Red House Painters. It seemed appropriate I was going to see their lead singer Mark Kozelek play a show in London after I attended the Greenwich Village Halloween parade. My plans were thwarted though, with Hurricane Sandy causing cancellation of the 2012 parade for the first time in its long history, and I found myself sheltering down the road in the Washington D.C. area for a week.

The New Jersey industrial skyline, described in Springsteen’s “Open All Night”, was melancholic on the bus ride south, but when I arrived in the nation’s capital I found the ordered medium-density somewhat homely, and was reminded of Canberra and Ottawa. D.C. was known as the “murder capital” in the early 1990s, but thankfully by 2012 the homicide rate had dropped to its lowest figure since 1963, the year in which some 250,000 civil rights campaigners marched on the city, and Martin Luther King, Jr., delivered his “I Have a Dream” speech in front of the Lincoln Memorial.

D.C. remains one of America’s most racially segregated cities, and in a predominantly African-American neighbourhood I was deeply inspired. My friend Renae and I attended a poetry open mic night at Busboys and Poets, a bookshop and venue named in honour of Langston Hughes, who worked as a busboy in the 1920s before gaining recognition as a writer and social activist. I was blown away by the quality of the spoken word that night. It was personal and political, but most of all it was positive, with a sense of enduring optimism in the face of injustice. 13 of Nazareth delivered a piece from the point of view of the bullet that killed MLK, and the woman after him had me in tears with a gutsy story about burying her Mum two days previously.

The contrast could hardly have been greater the following night when I attended another open mic night at a pub in the nearby town of Frederick, and angry young men screamed 90s covers. It was in this area The Blair Witch Project was filmed and I visited Markoff’s Haunted Forest with a gaggle of roller derby girls. This place is an elaborate Halloween theme park with a festival vibe. There were a few thousand punters and more than a hundred actors to chase them with chain saws etc. through woods and dusty cabins. I was impressed with the effort put in, more than scared. What was scary was the sea of “Romney Ryan” Republican party signs outside the mansions lining the Potomac River on the way out there.

Before returning to the Big Apple, I caught another bus to Baltimore, saddened by shock jocks on the radio viciously denouncing hurricane relief handouts. Baltimore is another city characterised by crime, partly courtesy of the TV shows Homicide and The Wire. I was kindly put up by a Perth ex-pat and his girlfriend. I sang Paul Kelly songs for my supper and got breakfast as well. She featured in a viral internet video about a one-eyed Emu, consistent with the thesis that animals and accidents are always popular. I learnt from them that models in weight loss commercials routinely wear fat suits for the “before” photo, and Edgar Allan Poe died just after drinking at a pub called “the Horse you road in on”.

Enough rambling. I did get to see Mark sing and that will be the topic of my next post.