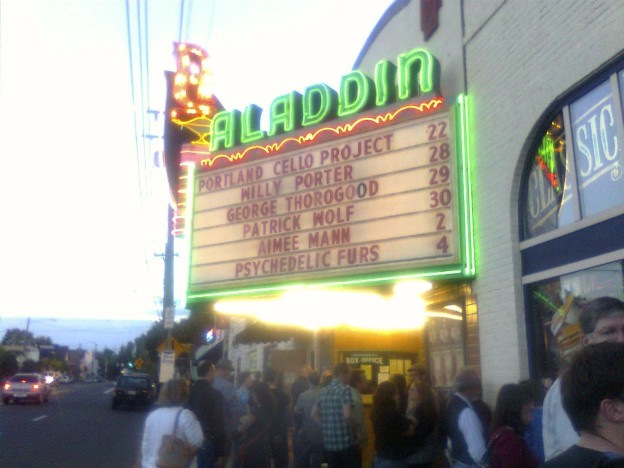 It was the reason I bought my first reggae album, and for those who know me that is no mean feat. I had always thought reggae sounded like the musicians couldn’t get the beat right, and it was called the “off” beat for a very good reason.

But let’s go back to the Grammy Awards fifteen years ago. Bob Dylan had won Album of the Year, for Time Out of Mind, and was on stage performing “Love Sick” when a shirtless man came up and danced/contorted wildly next to Dylan, with the words “Soy Bomb” written across his chest. It took security a good forty seconds to realise this was not part of Dylan’s act and escort the man, Michael Portnoy, off stage. Dylan gave one wary glance, but never stopped playing. Portnoy later said “Soy…represents dense nutritional life. Bomb is, obviously, an explosive destructive force. So, soy bomb is what I think art should be: dense, transformational, explosive life” and that he meant Soy Bomb as a “spontaneous explosion of the self to re-invigorate the currently bland music scene that exists.”

Now I’m not sure exactly what Portnoy thought of Dylan. Time Out of Mind is a good blues album but, when compared with another album nominated for the Grammy that year, it could be described as bland. That other album was OK Computer by Radiohead. Despite Grammylessness, Ok Computer received almost universal critical acclaim as a powerful portrait of end-of-millennium angst and the struggle for humanity in the technological age. I agreed, wearing my T-shirt of the album cover artwork on my first overseas trip until it completely fell to pieces (the only other shirt to get quite the same treatment was U2’s “Smell the Flowers While You Can” shirt for “One”).

Perhaps a good measure of an album, that’s if you should even measure art, is the extent to which other musicians have covered songs from it, or indeed covered the entire album. In 2006, the Easy Star All-Star put out Radiodread, a reggae/ska/dub take on Ok Computer, and that genre cherry was popped for me. Christopher O’Riley has recorded solo classical piano versions of most of the songs, along with other Radiohead songs, over two albums. His version of Let Down totally floors me every time. Various artists contributed to the Stereogum cover of the album. You can even watch a recent “performance” of Ok Computer by San Francisco drag queens (The robots performing Karma Police is my favourite).

Fast forward to Portland, Oregon, last year. I found out the Portland Cello Project was performing the album at the gorgeous art deco Aladdin Theatre, along with guests the Disassemble the Widget choir and the City of Tomorrow Wind Quintet. It was sold out, but I was very lucky to have a cousin who “knew someone” and I found myself in the third row. The tears started within seconds of the opening notes of Airbag.

Now I have teared up over powerful music before, but I don’t remember crying all the way through a performance like I did that night. It was good crying. I felt like the music had plugged me straight into the vein of what it means to be human. It also felt like a “spontaneous explosion of the self”. There were multiple standing ovations. The Portland Mercury reviewed the gig as “Haunting and vibrant and funny and jarring, lush and majestic and clever”. I wont try to add to that, but I will share one clip from the night featuring guest vocalist Adam Shearer. But really, “you had to be there”.